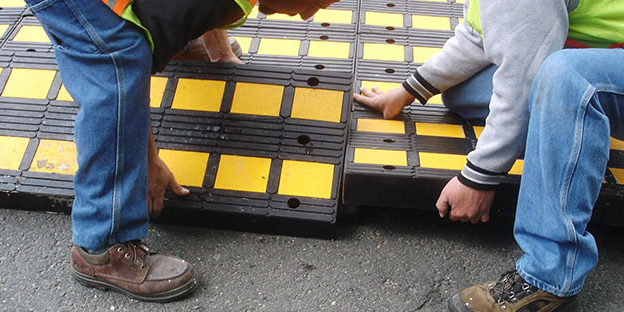 The largest city in the state of Maryland and the home of many historic neighborhoods and monuments, Baltimore is a diverse and eclectic city. Dedicated to safe roads, the city has an official traffic calming program in place to address speeding concerns. The city traditionally uses asphalt to create its speed humps.

An engineer from Baltimore’s department of transportation reached out to Traffic Logix recently regarding some speed humps they purchased a decade ago. The city had a school location where they wanted to install a rubber speed hump. In the course of research, they had discovered that 10 years ago the city had purchased two Traffic Logix speed humps, but only installed one. Remarkably, the one speed hump they installed, is still in its original location. Mr. John D. Malinowski, PE, M., ASCE, one of the city’s traffic engineers, reached out to find the expected life span of Traffic Logix’ rubber solutions.

The city wanted to find out:

With the passage of time, no one seems to quite remember why two rubber speed humps were purchased for a city that uses asphalt to create its humps.  The theory on why only one of them was installed is that the community it was purchased for decided against having a speed hump on their roads.

The life span of the rubber speed humps depends on usage but the city’s own rubber hump testifies to their longevity. The rubber hump installed 10 years ago on residential Aisquith Rd. in Southeast Baltimore remains, still slowing cars down every day on the picturesque road. The reflective taping has faded, although it can be easily replaced. The effect, however, has remained strong.

Mr. Malinowski observed of the hump, “I’ve stood there and watched it as cars pass. People really seem to slow down and they don’t speed up afterward. It’s a reminder to observe the speed limit and it actually seems to work.”

The speed hump is installed mid-block, where drivers tend to speed. There is a stoplight for cars going both south and north, and the mid-block speed hump keeps traffic calm in between.

The location the city was eying for another rubber installation was on Stranden Rd., near Lakeland Elementary School. The street is concrete and the city thought rubber might be easier to install on the surface than asphalt would be.

It turns out they’ve saved themselves the trouble of having to go out and buy a new speed hump to keep students safe. The rubber speed hump they’ve had in storage for ten years is good as new, and chances are it’s got a long life ahead of it.