Can your car keep you and those around you safer on the roads? 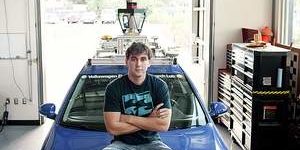 Imagine a world where traffic crashes are a thing of the past and everyone is safe on the roads. Seems impossible, but Jesse Levinson, a research scientist at Stanford University, is working on making it a reality.

There are already a vast number of optical and radar sensors monitoring cars on roadways across the country. Levinson’s pedestrian detection system helps alert drivers to imminent collisions with auditory, visual, and mechanical warnings, and if necessary, takes automatic action to prevent an accident.

Four car manufacturers have announced that they will offer models this year that allow the car to drive itself in speeds up to 37 mph. This past November the National Highway Traffic Safety Administration recommended that all cars be equipped with collision avoidance technologies. In two states, California and Nevada, it is even legal to operate a self-driving car.

Cars that drive on their own are still in the development stages but there are many computerized systems such as the one developed by Levinson that help people drive safer, park easier, and prevent accidents and injuries.