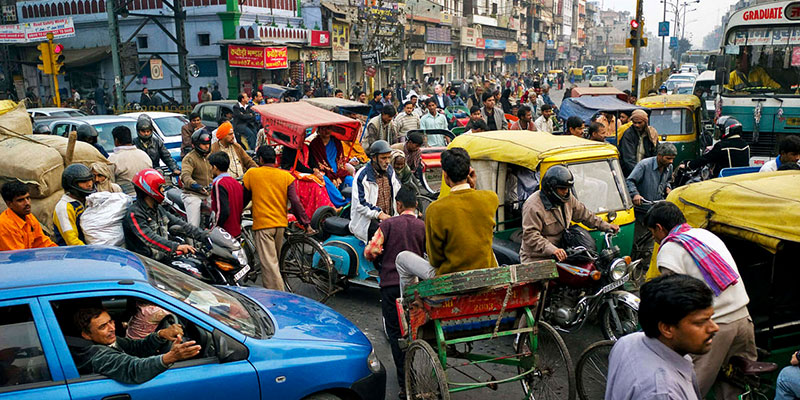 Changing the Future of Roads in Indian Cities

India loses one city every year to road fatalities. Yes, one whole city! Hard to believe?

The death toll due to road crashes in India stands at approximately 1.3 lakh per year. This figure almost surpasses the population of several small cities in the country.

In 2015, India signed the Brasilia Declaration. In it, India committed to reducing road accidents and fatalities by 50% by the year 2020. The numbers recorded so far are hardly significant. In 2017, road accidents decreased by a mere 3.27%. And the drop in fatalities resulting from these accidents was even smaller, just 1.9%.

Though people are aware about the risks and dangers associated with road traffic accidents, very few know about the link between road traffic injuries and economic growth. Every person dead, injured, or disabled as a result of a road accident, affects the lives of innumerable others who depend on them. The survivors and their families either lose a breadwinner, or have to incur huge medical care expenses, or may even lose their job and wages. Not to mention the adverse and immense social, physical, and psychological effects that they have to suffer.

Numbers show that India loses 3% of its GDP, close to a whopping 58 billion dollars, every year to road accidents. It is estimated that by reducing road traffic deaths and injuries by half, India could boost its economy by almost 7-14%. This change in numbers can lead to long-term gains and may also bring greater social welfare benefits to the road accident victims.

According to the World Health Organization, 90% of the world’s road traffic fatalities occur in low- and middle-income countries. Many developing countries have seen rapid motorization, which could have been due to rising incomes in the past few years. Although the incomes have increased, road safety management and enforcement of regulations leave a lot to be desired.

Yes, there’s no denying that road crashes have a devastating impact on victims and their families, but road fatalities and injuries are preventable, provided a scientific and holistic approach is adopted to tackle the problem.

According to the Transport Research Wing’s 2016 report on road accidents in India, roughly 3 lakh road accidents take place on its cities’ roads, and cause more than 80,000 deaths yearly. To bring these numbers down, traffic authorities across the nation are targeting major Indian cities. In their effort to ensure safety to road users, transport officials have begun identifying problem spots across traffic-heavy cities. This move will ensure safety for drivers too. 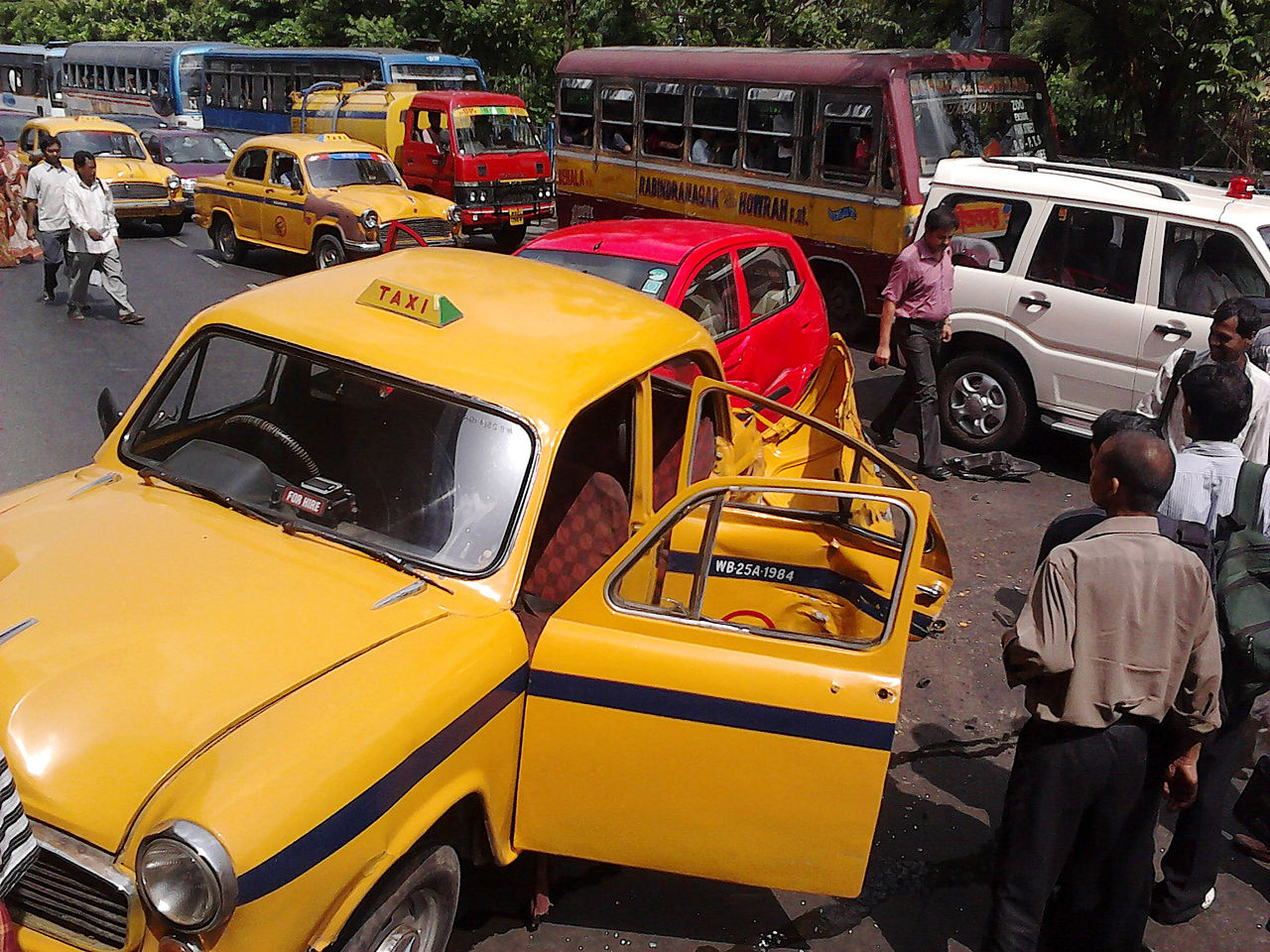 Safer Roads for Everyone

Officials in some cities are resorting to using radar technology in their effort to discipline speeding drivers. In this endeavor, Chandigarh has emerged as the city with a difference. Officials have employed measures such as effective policing along with raising awareness among road users and motorists.

In 2018, Chandigarh traffic officials decided to go ahead and install radar speed sensor display boards across accident-prone areas of the city. This was done to encourage drivers to drive within prescribed speed limits and not contribute to speeding-related fatalities.

The idea of installing radar speed signboards across cities is to caution motorists who are driving above the posted speed limit. These radar speed indicators also alert drivers by beaming messages like — ‘Your Speed’ and ‘Slow Down’. The sensor in the feedback display board can track an approaching vehicle from up to 50 meters away.

Kolkata, the capital of the state of West Bengal, is also the prime commercial, cultural, and educational center for East India. The oldest operating port in India is also located here. The city itself has an estimated population of 4.5 million. As the third most populated metropolitan area in India, the streets of Kolkata are crowded with cars, buses, taxis, and auto rickshaws. With its densely inhabited roads and neighborhoods, Kolkata faces significant challenges with speeding and resulting traffic accidents, injuries, and fatalities.

In 2016 alone, the roads of Kolkata saw 13,580 traffic accidents, 11,859 injuries, and 6,544 deaths. With rampant speeding and disregard for basic traffic rules, the traffic police of Kolkata decided they needed to take action to reduce speed and prevent road accidents and fatalities. 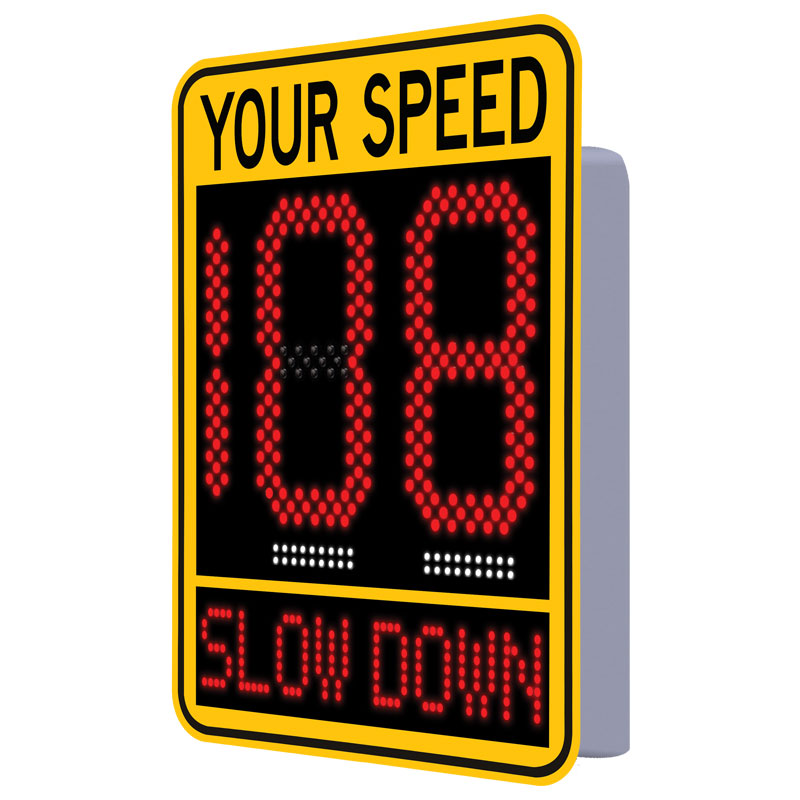 The Kolkata traffic authorities explored several options that could reduce speed and encourage safer driving. They decided to use Traffic Logix SafePace radar speed signs in some of the most traffic-heavy areas of the city. The traffic data gathered by the Traffic Logix SafePace radar speed signs showed remarkable results. Shortly after their installation, significant changes were evident in the behavior of Kolkata’s drivers.

The powerful combination of speed awareness measures and enforcement tools on the road proved a very effective mix for motorists of Kolkata. The rate of speed violations declined by over 28% across three locations, from July 2017 to July 2018.

But this was not the case in Bengaluru, the Silicon Valley of India. Even though the roads of the city are never free of traffic, the city’s drivers manage to speed on them. Traffic officials found the drivers speeding on the city’s many flyovers. While the maximum permissible speed on flyovers is 80 kmph for cars, most motorists were exceeding this limit and endangering lives. Some among them were even found driving at over 120 kmph, according to the police.

To curb speeding and make roads safer, the Bengaluru Traffic Police decided to go the Chandigarh and Kolkata way. They started installing driver feedback signboards that would display the vehicle speed as a motorist approached them. This was done so that the drivers would become conscious about the speed at which they were traveling.

If cities have safer roads and streets, it translates to good business too. Certain areas of the cities need more footfall and slower speeds on the roads encourage more feet on the road and greater pedestrian movement. Many businesses find it hard to thrive if foot traffic is low. It’s an ongoing struggle for traffic authorities to ensure that some areas in each city remain conducive to cyclists and pedestrians. This calls for stricter road safety rules and regulations. And the need of the hour is implementing practical solutions to increase road safety.

Radar speed signs have turned out to be beneficial, especially with today’s frequently occupied drivers. SafePace Radar Speed Signs are designed to slow cars down and make streets safer for everyone. Studies have shown radar speed signs are able to achieve 10-20% reduction in average roadway speeds, along with an increase in compliance with the posted speed limit. 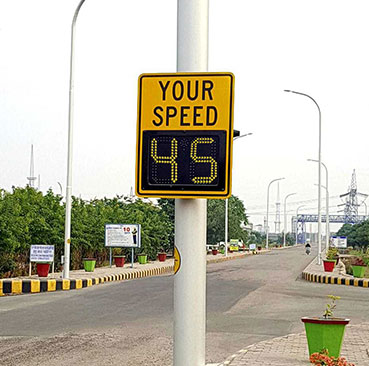 Speed display signs are used around the world and have proved to be highly effective in reducing speed. The use of speed cameras offer the added element of enforcement. With precise photos of license plates, traffic police can issue tickets to speeding drivers to penalize them and discourage repeated offenses. The radar speed signs offer the following — display speed to oncoming vehicles with highly visible LED digits, flash a bright strobe light at speeding drivers to encourage them to slow down, offer customized messaging that can respond to driver speed, and gather detailed speed and traffic data that can be accessed remotely from anywhere.

Radar speed signs are easy to install and inexpensive to operate. Many run on solar power, eliminating the need for wires. Some models are portable, so they’re easy to move to different locations. These speed signs prompt 35 to 70% of speeding drivers to slow down.